Two of Europe’s top teams go head-to-head in Germany to kick off their 2014-15 UEFA Champions League campaigns on Tuesday.

Both Borussia Dortmund and Arsenal have been unlucky with injuries to start their domestic seasons and both remain with a number of absentees ahead of their clash at Signal Iduna Park.

These two sides met in the Champions League group stage only last season in which the away side won each game. They were both able to progress to the knock out rounds and both sides are expected to again this season with Galatasaray and Anderlecht the other two teams in Group D.

Arsenal are coming off the back of a 2-2 draw at home to Manchester City on Saturday which saw a majority of fans disappointed their side weren’t able to win or able to hold onto their late lead. The Gunners have drawn their last three Premier League games after starting the season with a late win over Crystal Palace.

After losing at home to Bayer 04 Leverkusen to start their season, Borussia Dortmund have won back-to-back matches to put them 1 point off the top of the Bundesliga table.

Marco Reus is out with an ankle injury – a massive blow to Dortmund. Shinji Kagawa scored on his second debut for the German side at the weekend – not a bad replacement for the German international.

İlkay Gündoğan has been out for a year and remains absent. Miloš Jojić and the ageing Sebastian Kehl have been protecting the back four to start the season, whilst Sven Bender is slowly returning from injury and could start this game.

Nuri Şahin, another centre midfielder is out for Dortmund. The playmaker hasn’t played this season and is expected to be out for another two months following knee surgery.

Captain Mats Hummel is yet to play this season due to injury – Neven Subotić and Soktratis has been the central defensive partnership.

Jakub Błaszczykowski has also yet to feature this season due to injury.

Danny Welbeck made his debut for Arsenal at the weekend and can be expected to start up front of the Gunners with Olivier Giroud injured until the new year.

Theo Walcott isn’t expected to return to the first team until the end of the month until the earliest.

Left-back Nacho Monreal is injured whilst right-back Mathieu Debuchy is suspended following his red card in the second leg of Arsenal’s playoff round victory over Beşiktaş. 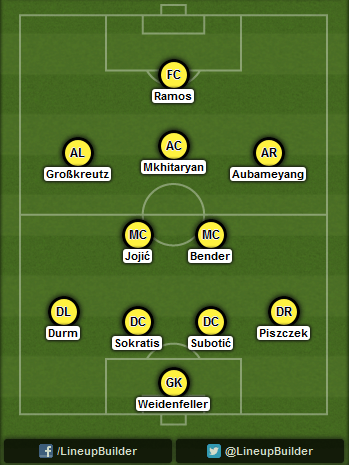 The goalkeeper and back four is the best available to Jürgen Klopp. Should Sven Bender be fit enough to start, it will be between Miloš Jojić and Sebastian Kehl to partner him.

Pierre-Emerick Aubameyang offers pace down the right wing to catch out the Arsenal defence when their full-backs push far forward as Manchester City did at the weekend and other teams have done in the recent past. The Gabon forward playing on the right leaves Adrián Ramos to start up front. 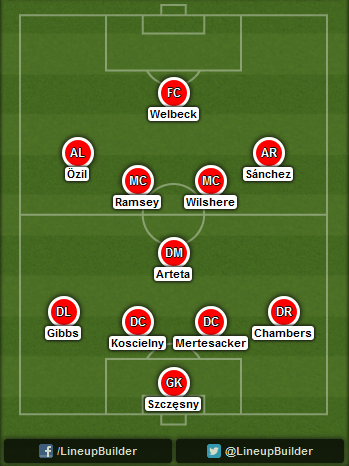 Arsène Wenger has no other fit options in defence so this is how the back four will look. Mikel Arteta was a substitute at the weekend – he’s fit enough to replace Mathieu Flamini on Tuesday. The attacking five is how they lined up against the Premier League champions at the weekend – I don’t see any reasons to change it.

Henrikh Mkhitaryan vs Mikel Arteta
Borussia Dortmund’s attacking midfielder is one of the top playmakers in world football. Loves to take on defenders, fires in shots from long range, has a good goalscoring record and creates chances for his teammates too. Mikel Arteta will need help from the likes of Jack Wilshere and Aaron Ramsey to keep the Armenian quiet. A one-on-one match up with the Spaniard would be horrible for Arsenal.

Alexis Sánchez vs Erik Durm
Borussia Dortmund’s 22-year old left-back broke into the first-team last season following a lengthy injury to Marcel Schmelzer. By the end of the season he was part of Joachim Löw’s World Cup-winning squad in Brazil. Durm faces a tough test on Tuesday against Arsenal’s quick and skiful forward Alexis Sánchez. The Chilean scored the goal that took Arsenal into the group stage and constantly looks to terrorise defenders by running at them. Durm can expect to have good cover from Kevin Großkreutz at least.

Danny Welbeck vs Sokratis Papastathopoulos
Borussia Dortmund’s defence has looked a bit shaky when tested in their three Bundesliga games this season – conceding a combined five goals. Four of those goals have been in the final 10 minutes of games too. Danny Welbeck’s pace could see the England international get in behind the two centre-backs who like to push forward in Klopp’s high press tactics. The £16 million deadline day signing will need to improve on the finish he showed against Manchester City if he gets the chance midweek.

Prediction: Borussia Dortmund 1-2 Arsenal
We’re going to be bold and say Arsenal can go to Germany and come back with three points. Whilst that’s two more than they got at Leicester, Borussia Dortmund are still without a number of key first-team players and Arsenal’s attacking unit on paper looks good to break down the Dortmund defence that conceded two at home to Bayer 04 Leverkusen and two away to FC Augsburg.