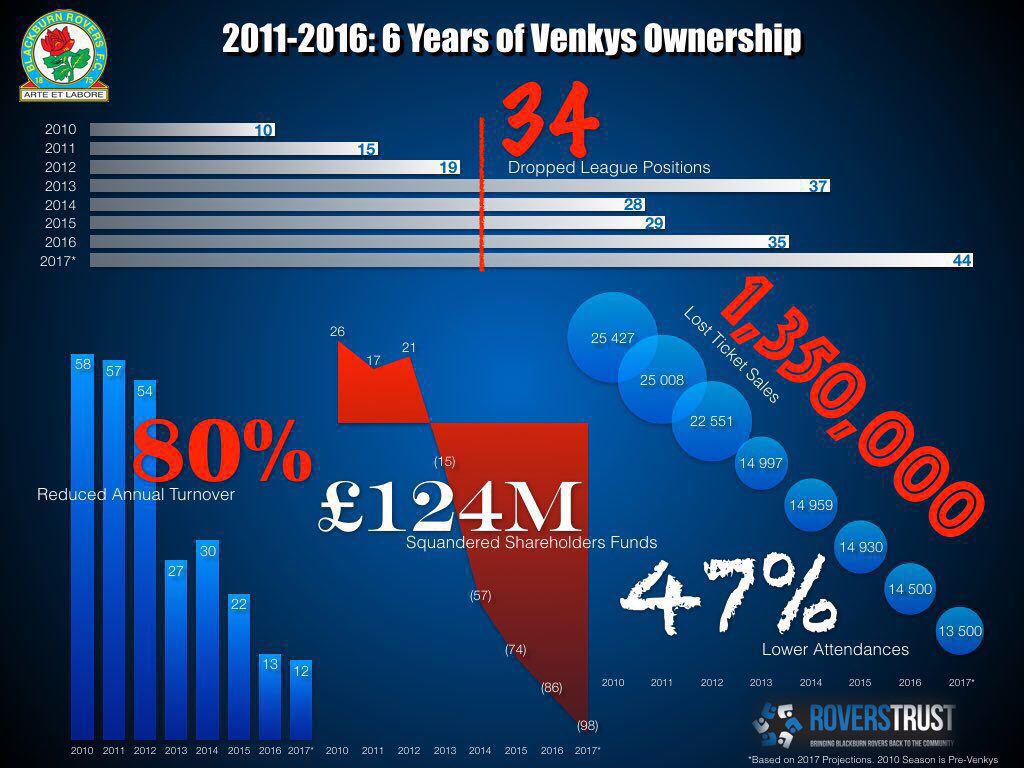 Supporters of former Premier League champions Blackburn Rovers are planning to take protesting to a whole new level as they try to save their beleaguered club.

Fan groups say they will fly to India in January in a bid to force a meeting with controversial club owners Venky’s.

A protest during a one-day international cricket match between India and England has also been suggested, while the club’s leading all-time goalscorer is also lending his support to the fans’ efforts.

Venky’s ownership of Rovers has been a catalogue of disasters, with the club falling out of England’s top flight in 2012 and debts rising to over $130 million.

With average attendances almost halving in the last six years and the club in danger of dropping further down the leagues, the supporters have decided enough is enough. 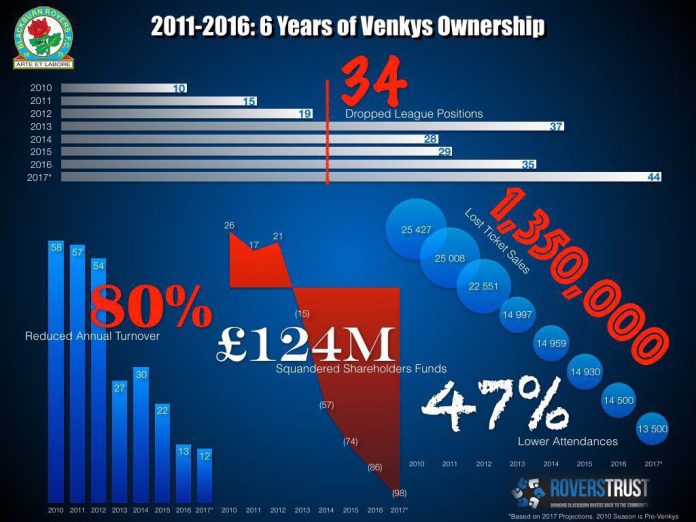 Rovers Trust chairman Wayne Wild, who has called for Venky’s to sell the club, told the Lancashire Telegraph: “Our view is that we want to take this to India.

“Our view is that we have a delegation of people who together go out as a very professional set of people and offer to meet the owners in their own back yard.

“One target date we have got is January 15. England play India in a one-day international in Pune. We think it could give us a lot of exposure. Then we want a very sustained campaign after that.

“We will set up a meeting and if they don’t turn up then the campaign continues and we continue that in India itself.

“It’s going to be expensive and we’re going to need a fighting fund to put that together.”

Rovers’ rapid fall from grace is a remarkable story – particularly after the club had ended an 81-year wait to secure the league title in 1994/95 and established itself as an almost permanent fixture in England’s top flight.

European participation became the norm for Rovers as they faced the likes of Spartak Moscow, Feyenoord and Olympique Lyonnais in the Champions League and UEFA Cup.

The club still boasts the tenth best all-time record in Premier League history, but now find themselves languishing a tier below at the bottom of the Championship.

Widely regarded as one of the best-run clubs in the country, Rovers were taken over in 2010 by Indian poultry giant Venky’s who promised to transform the team.

Talk of Champions League qualification quickly followed, while superstar signings such as Ronaldinho and David Beckham were rumoured.

The shock sacking of current England boss Sam Allardyce shortly after the takeover set alarm bells ringing, particularly as he was replaced by the unproven Steve Kean.

Venky’s soon found themselves under pressure, with fans turning on the Indian owners when it became apparent that Kean was not up to the job.

Question marks over the involvement of football agent Jerome Anderson were also raised, with Rovers’ board members contacting Venky’s boss Anuradha Desai about his role with the club.

He also represented Kean, leading to respected figures in the game questioning how the club was being run.

Then Manchester United boss Sir Alex Ferguson was hugely critical of Anderson’s involvement with Rovers, saying: “You’ve got that issue at Blackburn of an agent involved and deciding the future of the club – Jerome Anderson. He couldn’t pick his nose.

“It’s baffling and it’s a serious threat to how clubs get run and how they conduct themselves.”

Former Rovers full-back and Real Madrid legend Michel Salgado claimed the club had offered him and other players 80% of their contracts to be released on free so the club could sign some of Anderson’s clients which would then provide commission for the agent.

Rovers were subsequently relegated in 2012 as the club fell apart at the seams.

Malaysian television pundit Shebby Singh joined the club as “global advisor” in June that year, but that only served to antagonise the fans even further.

Kean was eventually dismissed in September 2012, but confusion still reigned as managers came and went as the club plummeted down the Championship.

The off-field administration at Ewood Park was also in chaos.

Glen Mullan, the former Rovers Trust secretary, has been instrumental in bringing Rovers’ plight into the public domain.

He insists Rovers’ problems run much deeper than just mismanagement, with an email from Singh to Mullan appearing to back him up.

Singh claimed Rovers were in a relegation battle “by design” – something Mullan says would have been to the benefit of Anderson as the club would have been forced to offload his players enabling him to pocket more commission.

Mullan believes the situation with Venky’s ownership has now reached its breaking point.

“They’re just not listening,” Mullan told The Times. “We’ve tried protests, we’ve tried going to the FA, we’ve tried the Football League, the media don’t really pick it up any more. You get relegated from the Premier League and you’re not big news any more, so we’re on our own.”

Gary Bowyer took over as caretaker manager in March 2013 and helped the club avoid relegation from the Championship.

He was appointed on a full-time basis and steadied the ship, leading Rovers to 8th and 9th placed finishes. However, Bowyer was bizarrely dismissed in November 2015 and replaced by ex-Scotland midfielder Paul Lambert.

The former Norwich City and Aston Villa boss lasted just six months before resigning after Venky’s refused to back him in the transfer market.

Owen Coyle, who has also been linked to SEM-Kentaro in the past, was appointed as the club’s new manager despite a less than impressive record in the MLS with Houston Dynamo.

With Rovers cashing in on most of their saleable playing assets and replacing them with loans and free transfers, the club is currently rooted to the foot of the Championship with just one point from five games.

After a recent cup tie attracted just 3,400 people, the lowest attendance in over 30 years for any Rovers fixture, the fans have opted to take their fight to India.

BRFC Action Group chairman Mark Fish said: “Blackburn Rovers is a proud community football club but the Venky’s don’t care about that. It is a complete irrelevance to them.

“There is a generation of supporters the club is in big trouble of losing and the Venky’s don’t care about that either.

“We have a concerned supporter base and we have come together looking for unity. We have got a duty to protect this football club for future generations.”

Rovers’ all-time leading goalscorer, Simon Garner, has thrown his weight behind the campaign after accepting an offer to be the ambassador of a unified fans’ group which will put pressure on Venky’s to sell the club.

The Rovers Trust and BRFC Action Group have joined forces with Ewood Blues and BRFCS.com under the banner ‘We Are Rovers’ after a public meeting in Blackburn last Thursday where supporters called for united action.

The new group’s two core objectives are ‘to seek to encourage Venky’s to put the club up for sale’ and ‘to collectively work with new owners on ways of re-engaging supporters and re-establishing Rovers as a club at the heart of its community’.

Garner said: “I’ve supported Rovers fans in their efforts to take back control of the club for five years and the ‘We Are Rovers’ initiative is a very welcome step up in the fight to change ownership.

“Like most fans I’ve had to watch appalled at what has happened to Blackburn Rovers. Equally bad is the impact terrible ownership has had on the team, the community and on the supporters.

“I will be fully behind ‘We Are Rovers’ as we seek to further highlight the actions that have brought our once proud club to its knees.

“For the sake of everyone concerned about this famous old club, we need the Rao family to hear the message in Blackburn and in India – do the decent thing and sell Blackburn Rovers now.”

“‘We Are Rovers’ is not about the manager, the team or the league position. It’s not even about the few remaining administrators left at Ewood Park who are trying to run a football club in appalling circumstances.

“Owning and working for a football club; playing for and supporting the team, should be a joy and a privilege ñ it certainly was when I pulled on that famous blue and white jersey.

“But the pride and the fun have been driven out of the club. The fans’ passion will never be removed though and that’s what is driving ‘We Are Rovers’.”