Javier ‘Chicharito’ Hernandez has taken the Premier League by storm. Fans were wary of his signing after similar unknown signings Manucho and Zoran Tosic proving to be quite wasteful. However, pessimism soon turned into starry-eyed optimism as United fans began to realize they may have unearthed some quite special after two brilliant goals in the World Cup. There had been no big name signing, but nonetheless Hernandez brought a feel good factor to United when he signed which has quickly made him a fans favorite.

Every single blog written about the young Mexican has inevitable mentioned the comparison between him and Ole Gunnar Soljskaer and it’s not hard to see why. His finishing ability, his knack of turning up in the right place and the right time and his ‘baby-face’ has had many fans questioning is he a carbon copy of the original Baby-faced assassin. Impressively Hernandez is just two goals shy from Soljskaer’s 19 goal haul in his debut season and in less starts too. However, the real test will be whether he can with stain his form season after season like Ole did. However, I’ll save that article for another day!

This article is about Hernandez goal celebration this season… the kissing of the badge. I’m not against players kissing the badge, it shows their passion and love for the club at the time and with Chicharito it seems to really genuine. However, United fans have suffered from deceiving players in the past few seasons that has made some very paranoid and untrustworthy of players.

Cristiano Ronaldo toyed with our emotions with his dream of playing for Madrid which dampened the summer of 08 which should have a been a summer of pure celebration and boast after Premier League and Champions League success. Yet, it turned to be a summer of praying and hoping that our number seven would stay at Old Trafford. He did, but it was more in body then in mind. It wasn’t the same Ronaldo of a few months ago that managed 42 goals in all competitions. Yes he did show glimpses of his special quality against Arsenal and Porto for example, but ‘Viva Ronaldo’ was never sung with the same passion and affection again.

Carlos Tevez quickly gained the love of the fans like Chicharito with his all action displays and his ability to score at important times. Especially in the 2007/08 season. However, frustrated being on the bench and unwilling to stay and fight for his place Tevez departed OT and went across the road and joined the City ‘revolution’. He is now public enemy number 1 and the many of fans who once chanted ‘Fergie Sign Him Up’ now have no problem at booing him with every chance they get.

However, we all had that feeling deep down that Ronaldo would leave for Madrid eventually and with Tevez struggling with the language it was unlikely that he would stay at United for a long period. The real shock came when Wayne Rooney our marquee and most loved player announced he wanted to leave the club. The betrayal was a heartache for every United fan, how could Wayne Rooney our beloved number 10 actually want to leave? Especially only months earlier stating he wanted to stay at United for the rest of his career. He has since signed a new five year contract, but some bitterness can still be felt by many United fans.

It’s not just United who have felt the betrayal of deceiving players. Emmanuel Adebayor managed 30 goals in the 07/08 season before signing a five year contract after speculation linking him with a move to Ac Milan. However Adebayor could only manage 16 goals in the following season and left for Man City for a fee of 25 million in the summer of 2009 – one year after signing a new contract. He would then go on to score against Arsenal before running the length of the field to celebrate in front of the Arsenal fans. 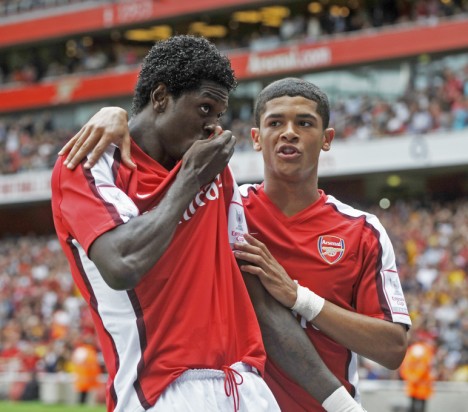 Alexander Hleb left Arsenal for Barcelona in 2008 and took no time in kissing the badge in front of the gathered media. He now is on loan at Birmingham. 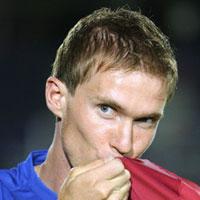 Actions and players like these are what make the likes of Ryan Giggs, Paul Scholes, Gary Neville and Ole Gunnar Solskaer the legends they are today. All have managed 10+ years in a Man United shirt with Ryan even managing 20 years. Javier Hernandez has stated he would love to stay at the club for the next ten years. However, fans are more suspicious of their players these days, contracts don’t have the same value as they used to have. Now they’re used as a tool to get more money for the player rather then securing a player for a few more years.

As I said it honestly seems like what ever Hernandez said and does is 100 percent genuine. However, that doesn’t stop fans waking up in cold sweats about him announcing having a ‘dream’ to play for the likes of Real Madrid or Barcelona. I pray I never have to write an article about Javier Hernandez leaving the club if he keeps up his form for many years to come. I know many other United fans feel the same. The one thing that seems to set Hernandez and Rooney apart is the people around the pair. While Wayne Rooney has the much hated Paul Stretford by his side, Chicharito has his Father and grandfather (two former football players) to guide him in his career.

So keep smiling and kissing the badge Hernandez, but please for your own sake only do it if you genuinely mean it.