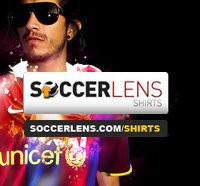 Soccerlens Shirts is the section of the blog where, as the name suggests, Soccerlens reveals, discusses, reviews football kits, shoes and other football related accessories. SL Shirts have provided you with some must-read features over the years covering signed products to weirdest football merchandise.

More recently, in 2010, the Shirts section has gone on to a whole another level with a wider range and more details about football shoes, kits and more.

Can Football Boots Cause Injuries

Following the horrific injuries of Antonio Valencia and Fraizer Campbell, Steve Bruce is starting an investigation of new football boots, linking them to some of the serious injuries of recent times. According to the Guardian:

“Steve Bruce has called for a conference on footballers’ footwear and the state of modern pitches in the wake of horrific injuries suffered by players wearing fashionable blades rather than conventionally studded boots. Already this season Manchester United’s Antonio Valencia andSunderland’s Fraizer Campbell have sustained appalling injuries after their feet became trapped in the turf as they contested possession.”

Read the complete article: Can Football Boots Cause Injuries.

The 2010 World Cup in South Africa was definitely the biggest football event of the year. Sure, Inter Milan won a treble, Bayern Munich and Chelsea won doubles but a world cup is a World Cup. Spain came out victorious in the end and a lot has been said about it over the months.

Here on the World Cup Shirts page, we present the 2010 World Cup kits of the 32 participant nations.

The two leading brands in world of sports goods manufacturers, Nike and Adidas. These two have been fighting for dominance very hard for the past decade or so and in the process they have left a few of their adversaries way behind – specially in football, even more so in football shoes. Puma, Reebok and Umbro are all big brands but they are nowhere to be seen when compared to Nike and Adidas.

The 2010-2011 Speed Football boots have all been released, in new colour combinations, new weights in some cases, and with new players signed on to represent them.

Read the complete article: The Fastest Football Boots of 2010/2011.

Adidas creates a new ball for each global competition. The word Jabulani means “to rejoice or celebrate” in Zulu, one of the eleven official languages of the Republic of South Africa. This ball features eleven different colors that reflect the diversity of the Rainbow Nation. These balls are manufactured in China and have a retail price of US $150. Replica models cost US $25.