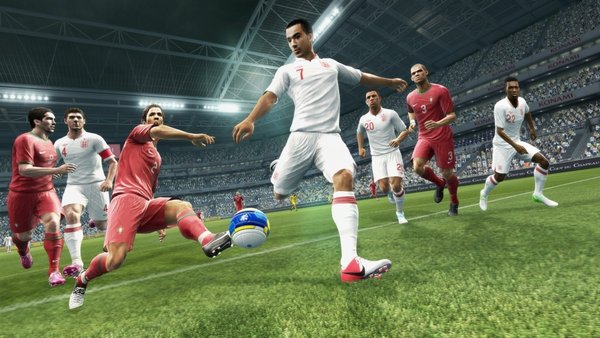 Football has established itself as the most popular sport in the world over the years.

The growing number of fans has added to the demand for football games.

Although the likes of Pro Evolution Soccer and FIFA have done an extraordinary job to bridge the gap between real life and the virtual experience, there are others who have who have done it for free.

Nowadays users can not only play these games without having to pay for them, they can also access these games from anywhere, provided they have an internet connection.

Furthermore, with these browser based games, there is no need to stay up-to-date with the latest technology and consoles. All of these games can be played on a reasonably configured computer.

Here at Soccerlens, we look at the 20 most popular online football games right now.

This online football game sets up some unique challenges for the players, who need to overcome the hurdles and win the game.

You get to choose from 15 top teams and try to win Copa Libertadores.

Usually, the players get to play the second match after an automatic draw or loss in the first game.

All that needs to be done is, win the second game, make up the goal difference if need be and progress onto the next stage.

And just like the Champions League, away goals rule applies, except in the finals where you play extra time in case of a tie.

New Star Soccer allows the players to experience a personal journey through the footballing world.

At the start, the user needs to get past his trial by learning the simple passing routines and shooting exercises.

This is followed by signing a contract with a lower league club and then it is all about rising through the ranks and getting to a top European club.

You can dribble and even control your shooting in this game. Furthermore, improved gameplay and 3D quality graphics make this one of the best online games around.

Football Superstars is another premium online footballing experience with very good graphics and a detailed database.

Here you can play with some established international players. The only difference with the other games is that you need to run the setup before playing it online.

Players can compete with millions of other fans from across the globe. There is a leader board where you get to see the scores and achievement of other players and then improve accordingly.

England Soccer League provides an experience closest to that of FIFA or PES.

Here you can choose the English club of your choice and enjoy a gameplay similar to that of FIFA/PES.

However, the names of the clubs and the players are spelt differently for copyright reasons.

Other than that it is a very fulfilling online experience in case you do not want to shell out top dollar for the high-end games.

Goal United Pro lets you experience the life of a manager.

This online game is similar to that of Football Manager and all you need to do is decide the training routine, tactics, starting lineups, player rotation. Also, there is the option to buy and sell players.

Just like Goal United Pro, this game offers you the experience of managing a club without actually playing football yourself.

Online Soccer Manager has tie-ups with top clubs like Juventus and has a huge database of clubs and players.

You can register with your email or social media accounts before starting the game.

Stick Football allows you to build your own team and play as many matches as you want.

It also comes with some advanced features like Swerve shot or drilled placement shots.

This is an online based 5-a-side football game.

You can create your own team and customise players. For example, edit player’s skin tone or hairstyle.

You will compete with the AI with your custom build side.

This is an online based penalty kick taking game.

You can choose from several world-class players from around the world including the likes of Cristiano Ronaldo, Lionel Messi, and Neymar.

SpeedPlay will test your control and precision.

With more advanced movement and better AI, players can be made to press all over the pitch with the Keyboard or a Mouse.

The objective is to outscore the opposition in the allotted time.

There are several international teams to choose from. Furthermore, there is also a game mode that allows you to play penalty shootouts without having to play the match.

Soccer Pro is one of the most popular and user-friendly games out there.

Produced by Mini Clip (the makers of 8 Ball Pool), it has a comprehensive gameplay including fancy dribbles and efficient shooting.

You can increase your player’s attributes like pace by running through boosters carefully placed around the pitch.

Lords of Football will allow the users to take control of the club as a manager. But this online based game requires a more detailed approach.

You will need to mentor your players off the pitch as well.

Furthermore, you need to make sure you are achieving the club President’s goals (such as the Champions League).

Here you can take control of a professional club in England, France, Spain or Germany.

This is a penalty shootout game where you are the keeper.

All you have to do is save the shots.

There is a wide variety of teams to choose from including the likes of Chelsea, Liverpool, Manchester United and Arsenal.

This is a browser based game focusing only on set pieces.

Here you can pick a variety of international teams and all you have to do is cross the ball from a corner accurately and then head it into the goal.

This is then followed up by you defending an opposition corner.

All you need to do is pick an international or domestic side and then dribble past your opposition to score a goal.

Hattrick is an online based football game which is very similar to OSM, Goal United Pro and Lords of Football.

Here you take charge of the club as a manager and your job is to win titles for your team and help the players grow.

You are in charge of training, tactics substitutions etc.

This game is pretty self-explanatory.

All you have to do is choose one of your favorite football teams from around the world and defend your goal.

Once you have managed to protect your goal, you have to try and score a penalty yourself now.

This online based football game is centered on free kicks.

Simply score your team’s free kicks and help them make it to the finals.

Here you can design your own players and then control them with arrows. Determine their actions with keys – X will pass and C will shoot.

The fatigue indicator shows when the player is most and least effective.

If the green circle around the ball-carrier is depleted, the player is tired and that will affect his efficiency and speed.

Ahmed Bilal created Sportslens in 2006. He is a business consultant and entrepreneur who helps businesses identify and overcome their biggest challenges. He’s also the founder of Football Media, an online advertising agency that specialises in sports and male audience targeting, with a monthly reach of 100m+ sports fans in the UK and US. He’s also the owner of Soccerlens.com – a sports news site that reaches 3m+ readers / month.