Belgium came from behind in their opening World Cup game against a stubborn Algeria in Belo Horizonte, kicking their Group H operation off with a win. It wasn’t made easy by the Algerians, who defended strongly and held their lead for 45 minutes, but eventually the quality shone through and they rescued the points. 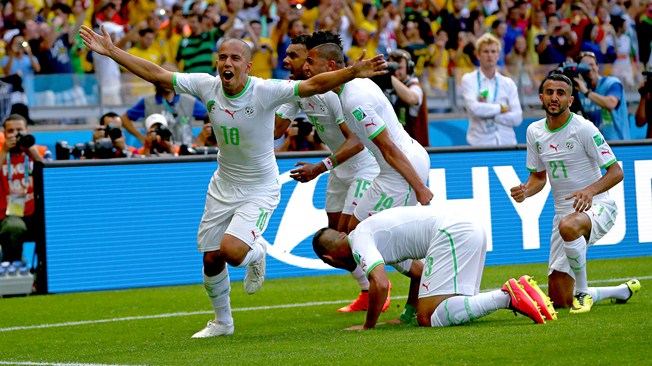 Against the flow of play, Algeria took a surprise lead after 25 minutes through a penalty conceded by Spurs defender Jan Vertonghen. There was little for Belgium to argue about and Valencia striker Sofiane Feghouli made no mistake from the spot.

Belgium continued to pressure Algeria, now in search of an equalizing goal, but the north Africans held tough at the back. The teamwork of Vahid Halilhodžić’s men made it very difficult for the likes of Eden Hazard, Romelu Lukaku and Mousa Dembele to really trouble the Algerian keeper, Rais Mbolhi.

The second half started largely in the same vein, De Bruyne continuing his solid perfomance and helping to craft half chances but still Algeria stood strong for the first 20 minutes after the break.

The Fennec Foxes had a few good chances to double their lead, heading just wide from a corner of 56 minutes but, having failed to capitalize on their opportunities and lead, the Belgians then got their momentum into full swing.

Marc Wilmots had sensed a necessity to change things up and began by bringing on Dries Mertens, and 20 minutes later also introduced the out of form Manchester United acquisition, Marouane Fellaini. They both proved to be inspired substitutions, beginning when the former finally sealed the Belgian break-through.

The big-haired midfielder was poised in the box, hanging on the last man for De Bruyne’s cross, timing his run and leap to perfection, heading it past the keeper, down off the crossbar, and Belgium were level.

The Europeans were then on the front foot, boosted by their goal and the impact on formation the changes had made and Algeria looked spent. They had given their all keeping Belgium at bay for so long and their tiredness began to clearly show. On the 80th minute De Bruyne stole the ball from Algeria and launched a counter attack that found Chelsea hero, Eden Hazard, who burst forward at pace. Hazard played an easy ball to the wide open Dries Mertens, who the Algerians just didn’t have the energy to track. With just one touch to set himself up, and the Napoli winger drilled home the winning goal.

Algeria managed to muster one last ditch effort in the dying embers of the game and almost stole a point. Belgium managed to cut out the danger and countered immediately but ultimately went into the corner and ran the clock down. The ref blew his whistle to confirm the Belgians start their campaign with three points.

Belgium look good to win their group but how much further can they progress? Will they upset the big-boys or will they meet their match in the knockouts?