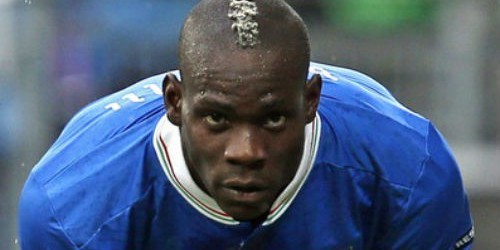 Mario Balotelli has been Italy’s first-choice striker under Cesare Prandelli.

Mario Balotelli will miss Italy’s FIFA World Cup qualifier away in Denmark with a thigh problem.

Former Manchester City striker Balotelli, 23, missed the Azzurri training session on Wednesday and went to a local hospital after complaining of pain. It later emerged that he had strained his left thigh.

National coach Cesare Prandelli was criticized for selecting Balotelli as he picked up a club ban for threatening referee Luca Banti during AC Milan’s game with Napoli.

Prandelli meanwhile defended calling up the fiery forward and pledged not to give up on him.

“We can’t lose our motivation to help this kid become stronger and better balanced, because he’s one of the best players we have,” Prandelli said of Balotelli.

“Of course I’m angry. But everyone who saw what happened and wants well for Mario should be angry.

“I decided to call him up because that’s our way to handle these things, to look each other in the eye in the changing room, discuss it and agree it will never happen again.

“If there was one more match on the ban, Balotelli would not be here. Period. There would be nothing to discuss. I’ve never called up a banned player.

“I’m tired of these crusades against Balotelli. When everyone is against somebody I like to defend that person.”

Italy have already qualified for next summer’s World Cup finals in Brazil, but third-place Denmark are chasing a playoff spot.

Balotelli is also a major doubt for the final Group B game against Armenia on Tuesday.

Prandelli has called up Fiorentina frontman Giuseppe Rossi following his return to fitness after a knee ligament tear.