Liverpool look to continue their impressive form when they travel to Aston Villa on Saturday, having lost only one of their last 13 games in all competitions and taking 11 points from their last five Premier League fixtures.

The Reds also have an impressive record at Villa Park – winning 10 of their last 16 Premier League visits, losing just once in that run.

Aston Villa start the weekend three points above the relegation zone and winless in their last six Premier League matches in which they have only scored one goal in this time.

Paul Lambert has problems in the centre of his defence. Aston Villa will be without Ron Vlaar, Philippe Senderos and Ciaran Clark for this match – the Dutch international is expected to be out for a month with a knee injury, the Swiss defender is a few weeks away from recovering from a calf injury and the latter is suspended.

Libor Kozák is the only other first-team player out but the Czech Republic international has been out for over a year now.

Brad Jones has still not returned from his thigh injury so Simon Mignolet may keep his place in goal. The Belgian kept a clean sheet at Sunderland last weekend.

Glen Johnson faces a late fitness test on his groin injury, Kolo Touré is at the African Cup of Nations and Jon Flanagan has been out all season.

Steven Gerrard and Adam Lallana too both face late fitness tests. The captain is the more optimistic hope of featuring in this game. Joe Allen is still sidelined.

Daniel Sturridge returned to first-team training this weekend but this match comes too early for the England international to make his return. 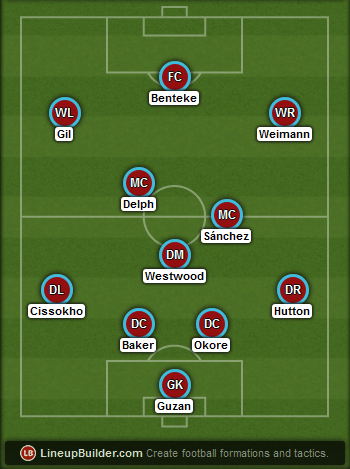 Youngster Nathan Baker is the only centre-back available to partner Jores Okore in the middle on Saturday. Paul Lambert does have his regular full-backs available. Carles Gil is available to make his debut – we’ve picked him over the terribly out-of-form Gabby Agbonlahor. The attacking midfielder should provide some creativity for the second half of the season – something Aston Villa have lacked this season. 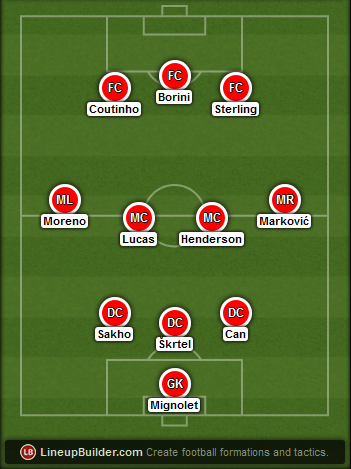 This back three has been playing together for a few weeks now and kept a clean sheet last weekend. A couple of absentees in the middle of the pitch would allow Jordan Henderson to move inside. If this happens, we think Lazar Marković will play the right wingback role and Raheem Sterling on the right of the front three. That would allow Fabio Borini to continue up front. The Italian made some good runs into space versus Sunderland but disappointingly did not get a single shot on target.

Philippe Coutinho vs Alan Hutton
Liverpool’s Brazilian playmaker has been in good form of late and although Alan Hutton has shut down some wingers this season he faces a tough challenge this weekend. Philippe Coutinho enjoys cutting inside on his right foot and shooting from around 18 yards. He’ll also have two attackers with him to create chances for with Aston Villa missing Ron Vlaar.

Raheem Sterling vs Aly Cissokho
These two were training together last season and we think Raheem Sterling can show up his former teammate no Saturday. The England international has not played for a fortnight so is fresh to cause Aston Villa problems. His pace will be a big threat and Liverpool fans will be hoping he can get back to goalscoring form down the right wing, provided he starts this game in that position.

Christian Benteke vs Martin Škrtel
Aston Villa have really struggled to score goals of late – only one in their last six matches, and only put one past bottom-of-the-Championship side Blackpool in the FA Cup third round. However, Christian Benteke has scored four goals in four matches versus Liverpool and only Tottenham have conceded more goals than the Reds in the current top nine. We think the Belgian striker is Aston Villa’s best hope for a goal in this match.

Prediction: Aston Villa 0-2 Liverpool
Liverpool have put some good form together of late and Aston Villa are winless and failing to score recently. Paul Lambert has a good record of late versus Liverpool but we expect that to end this weekend. The Villans missing Ron Vlaar is a big loss, as would Adam Lallana and Steven Gerrard if they don’t pass late fitness tests.