A rematch from early December when Stoke City hung on for a 3-2 victory at the Britannia Stadium.

Arsenal will be looking to take three points for a fourth consecutive game at the Emirates and close in on the top four with Manchester United and Southampton meeting each other shortly after this one has finished.

Stoke City are unbeaten in their last three Premier League games but have lost three of their last four on the road to current top half sides.

For the first time this season Arsène Wenger has all his defence to choose from. No injuries, no suspensions, no absentees. Yes, really Arsenal fans, they’re all available… subject to an injury in the pre-match wamrup or at the team meal the night before.

Mesut Özil could make his return this weekend after a three-month layoff. Not sure how badly the German is to wanting to make his return versus the tough-tackling Stoke or how willing Wenger is prepared to feature him in this match.

Theo Walcott started versus Hull City in the FA Cup last weekend so could start on the right wing in this game too. Though the England international was one of the poorer Gunners on the pitch in their 2-0 victory, suggesting he’s still lacking match fitness.

Mikel Arteta, Jack Wilshere and Aaron Ramsey are still all absent so Francis Coquelin can keep his starting place in front of the back four, alongside Mathieu Flamini.

Danny Welbeck has missed the last two and remains a doubt for this game with a thigh injury.

Mark Hughes continues to be without a number of attacking options. Bojan is still not ready to make his return and Mame Biram Diouf has flown out with Senegal for the African Cup of Nations.

Peter Odemwingie and Victor Moses are still on the sidelines, leaving Peter Crouch as their only out-and-out striker available. 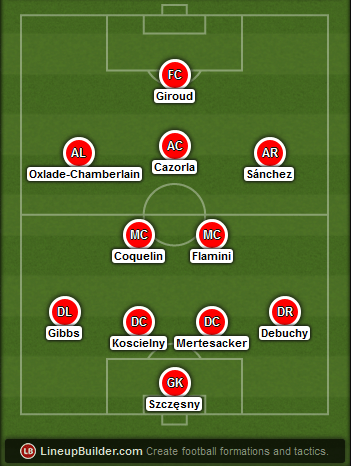 We think Santi Cazorla will start as the number 10 given his good form in the middle in recent weeks and that Mesut Özil makes the bench at best. Tomáš Rosický could start on the left wing but we’re going with Alex Oxlade-Chamberlain. With Olivier Giroud back from suspension he’ll start up front, so Alexis Sánchez can be pushed back to the right wing with Theo Walcott not at his sharpest yet, based on last weekend. 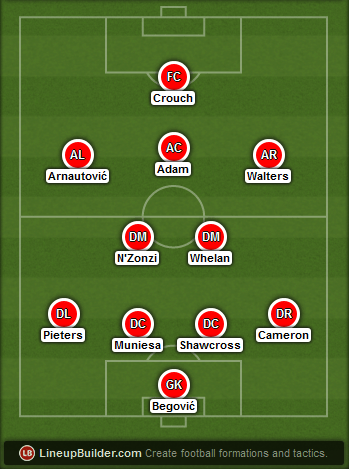 Mark Hughes could have a few issues in attack with his absentees. We’re not too sure who he’ll play behind Peter Crouch with both Bojan and Mame Biram Diouf unavailable. We’ve gone with Charlie Adam as Oussama Assaidi and Marko Arnautović are wide men.

Santi Cazorla vs Steven N’Zonzi
Even in defeat at the Britannia Stadium a month ago Santi Cazorla had a decent game in the Arsenal midfield. Thinking the home side will win this match on Sunday we’re looking at Santi Cazorla to be one of the key players for the Gunners. He’ll be looking to get the better of Steven N’Zonzi with his quick feet and accurate passing ability – he can certainly succeed at that up against the big man.

Alexis Sánchez vs Erik Pieters
Arsène Wenger lined Alexis Sánchez on the left wing last time this two met and it’s not unrealistic he won’t do that again with Alex Oxlade-Chamberlain and Theo Walcott both available to play down the right wing in place of the Chilean. However, Arsenal lost that game so the French manager may want to change things up and put Sánchez back out on the right where he has been excellent this season. Erik Pieters is an attacking left-back, and whilst we think it would be foolish of him to be aggressive in this game, don’t be surprised if the Arsenal right forward finds some room down that side.

Jonathan Walters vs Kieran Gibbs
Of all players it was Jonathan Walters who put in a man of the match performance in victory over Arsenal in December. The Stoke City player got the better of left-back Kieran Gibbs, helping himself to a goal on the day. Whilst it’s rare we feature Jonathan Walters in this section… in fact this must be the first time, we cannot rule out the Irishman from causing the Arsenal defence some problems this weekend too based on the last meeting.

Prediction: Arsenal 3-1 Stoke City
Arsenal showed in the second half what they’re capable of producing versus Stoke and we think they’ll continue where they left off and we’re that in terms of home form recently, with another three points from this match. The visitors are missing a lot of options in attack and the pace Arsenal have to offer, along with the form of Alexis Sánchez and Santi Cazorla, and the return of Olivier Giroud, we have to go with a Gunners win.