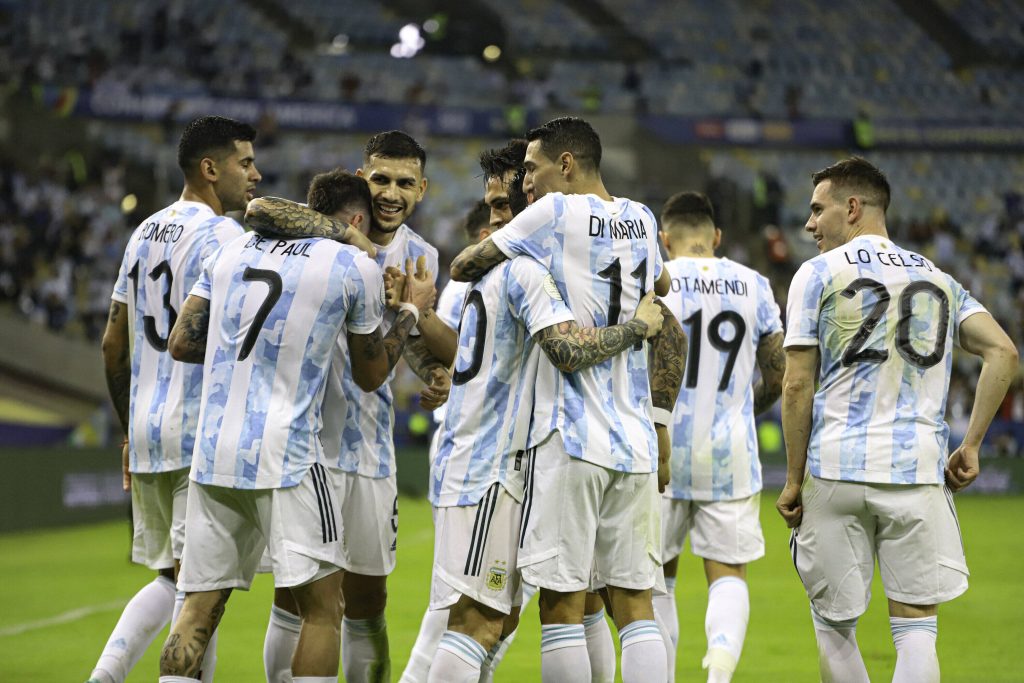 Argentina ended their 28-year trophy drought with a 1-0 win over Brazil in the final of Copa America at the Maracana Stadium on Saturday.

The first half was highly competitive, with significantly more fouls than meaningful attacks. Fred got himself in the book early on, and Leandro Paredes soon followed him.

Of course, with all the attacking talent on the pitch, it was inevitable that we’d see some magic, which came from Angel Di Maria in the 21st minute to give Argentina the lead.

Renan Lodi made a mess of a long ball, allowing the former Manchester United man to run through on goal and delicately lob the ball over Ederson and into the back of the net.

Brazil pushed for an equaliser but were unable to break down a tough Argentinian defence. They went in at half time 1-0 down, having had just one shot on target.

The holders piled on the pressure shortly after the break and thought they had levelled in the 52nd minute. Richarlison found the bottom corner but was flagged offside.

The Everton man had another chance not long afterwards. Neymar fed him, but his powerful effort was well saved by Emiliano Martinez in goal.

The game continued to be a feisty affair, with another seven players picking up bookings in the second half.

This stifled the attacking quality of both sides, with many of the star men struggling to make an impact.

In the final ten minutes, and things got seriously nervy for Argentina. Substitute Gabriel Barbose twice came close to netting an equaliser, first seeing his effort deflected wide by German Pezzella, and then having a half-volley turned over by Martinez.

Into the dying minutes, and Lionel Messi had a glorious chance to wrap the game up once and for all.

Rodrigo De Paul found him with a delightful through ball, but the captain lost control of the ball when he tried to round Ederson.

Thankfully for the six-time Ballon d’Or winner, this proved irrelevant, as the full time whistle blew without any more action.

The game finished 1-0 to Argentina, ensuring that they lifted the trophy.

Angel Di Maria was awarded the official Man of the Match award, and it’s clear to see why. He scored a fantastic goal to win the game and often looked threatening.

However, in terms of overall impact, it’s difficult to ignore Rodrigo De Paul. In attack, he contributed loads, assisting the goal and playing a beauty of a pass which Messi should have finished off late on.

And in midfield, he battled away, winning several tackles and helping protect the backline. In addition, he always kept a calm head despite the high stakes and rising temperatures.

A very well-rounded performance from the midfielder.

What does this mean for the GOAT debate?

Anyone who has paid any attention to the Messi vs Ronaldo debate over the past five years will know what this means.

Cristiano Ronaldo captained Portugal to European Championship glory back in 2016, while Messi was still unable to win anything major with Argentina.

For many, this was the difference between the two. Messi, having played in four major finals on the international stage, had still not got his hands on any silverware. Tonight, that changed.

In truth, this match shouldn’t have made much difference. Those who prefer Ronaldo are hardly going to change their minds over a match that Messi did very little aside from missing a sitter.

Similarly, had Brazil won, Messi’s supporters would have continued to believe that the Argentine was the superior player.

As for players from the past, Pele and Diego Maradona still have the upper hand at international level, having both lifted the World Cup. So really, not much has changed.

However, this result has effectively put a SEVENTH Ballon d’Or in Messi’s hands.

Golden Boot winner, most assists, Player of the Tournament winner, captaining his side to glory – it’s been a wonderful summer for the 34-year-old.