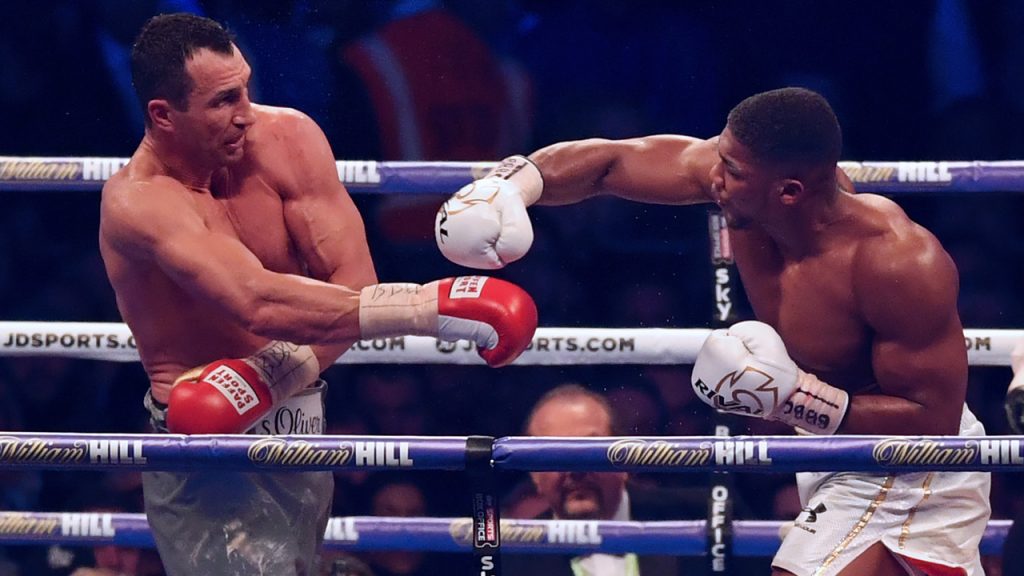 In front of a record-breaking 90,000 fans at Wembley Stadium in London, the scene was set for a mouthwatering heavyweight clash for the IBF, WBA and IBO World Heavyweight titles. The young lion Anthony Joshua against the old fox Wladimir Klitschko.

Many thought that Klitschko now 41 years old, was finished after his dreadful performance in defeat to Tyson Fury 17 months ago and this would be a walkover for the younger, fresher KO artist Joshua. How wrong they were. This fight turned out to be the most absorbing and brutal heavyweight contest in over a decade. Probably the best ever witnessed in the UK.

The fight started slowly in rounds 1 to 4 with little being thrown and both fighters hugely cautious of the other’s frightening power, especially Klitschko who was always out of range from Joshua’s attempted single and combination punches.

However the fight sparked into life in the 5th round. Joshua charged out of his corner and took the centre of the ring. He then landed a couple of vicious combinations, ending in a right hook which hurt Klitschko as he fell to the floor, trying desperately to hold himself up by Joshua’s shorts. Klitschko looked in deep trouble. He made it to his feet and beat the 10 count. Joshua then went for the kill, throwing everything he had at Klitschko. But Klitschko was heavyweight champion for over a decade for a reason and used all his wily old tricks, developed over a 21 year professional career to derail Joshua’s momentum.

Joshua appeared demoralised by his failure to knockout Klitschko and gassed out badly by the last minute of the round. Klitschko had regained his sense by then and turned the fight around. He landed a huge left hook which shook Joshua as the end of the round approached. Joshua staggered back to his corner; he was running on empty.

Klitschko now had a bounce in his step and turned up the heat in the 6th round. He touched Joshua’s head with the jab before coming through with a piston-like straight right, landing squarely on Joshua’s chin. The punch stunned Joshua and he fell to the canvas in a heap. At this point it looked like his dream of unifying the heavyweight division was over. He barely made it to his feet before the count. Klitschko looked to close the show and landed numerous big shots but Joshua showed true heart to withstand the Klitschko bombardment. Remarkably, he made it to the end of the round. At this point it looked like there would be only one winner – Wladimir Klitschko.

The next four rounds were compelling as Joshua looked to gain back his energy and composure with Klitschko looking to use his jab to find an opening to land a crushing right hand. Joshua looked out on his feet and was a sitting duck for Klitschko to take out. But Klitschko did not pull the trigger and go for the kill in those rounds. Instead as he started tiring he sought to cruise to a points win. Unfortunately this came back to haunt him in the 11th round.

At the start of the 11th Joshua somehow, almost super-humanly, found something extra, totally out of the blue. He had done very little in the previous four rounds. Klitschko tiring badly at this stage simply did not have energy to avoid the quick combinations Joshua had now started to throw again. Joshua landed a beautifully timed uppercut which rocked Klitschko to his core. The fact he managed to stay on his feet from that shot was a testament to his character and chin.

Joshua saw his opportunity and charged forward throwing a barrage of punches which knocked Klitschko down. He gamely rose to his feet, but the end was coming. Joshua jumped on him, throwing a dazzlingly quick combination which Klitschko could not avoid, a thudding left hook knocking him down again. This was the third time in the fight and the second time in the 11th. He rose again, against all the odds but the fight was nearly over. Joshua forced Klitschko onto the ropes landing five or six heavy blows in succession. Klitschko was not throwing back. The referee jumped in to save Klitschko from any more punishment.

The fight was over.

Joshua had done it.

He came back from the brink in a remarkable comeback to knock-out one of the greatest heavyweights in history. He had now become the unified heavyweight champion of the world.

After the fight, both men commended each other’s courage and determination, rightly so. Joshua then called out the other big names in the division – Fury and Deontay Wilder.

With renewed buzz and excitement now surrounding the heavyweight division especially after this fight let’s hope Joshua, Fury and Wilder get it on in the next few years.

Those fights will take heavyweight boxing to a whole new level of popularity not seen since the Mike Tyson/Evander Holyfield or Muhammed Ali/Joe Frazier/George Foreman days.