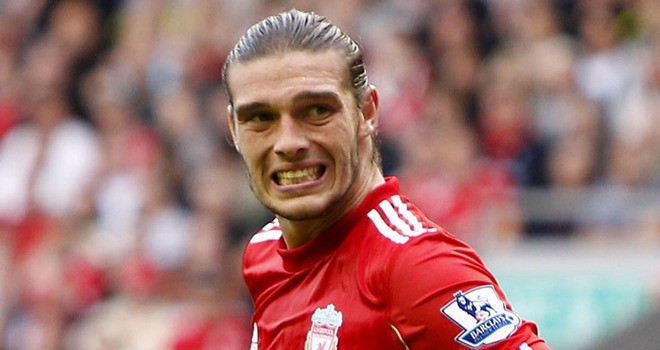 Liverpool take on West Ham in a thrilling Barclays Premier League encounter later today. Former Reds Stewart Downing and Andy Carroll are set to face their old club after the duo were told they do not have a future at Merseyside and were sold to West Ham.

Liverpool signed Andy Carroll for a club record fee of 35 million pounds from Newcastle after the departure of fan favorite Fernando Torres. Since his arrival Carroll struggled to fit in at Liverpool and was eventually shown the door by new manager Brendan Rodgers, who believed that the England forward was not mobile enough to suit his style of play.

Carroll’ West Ham team mate Stewart Downing suffered a similar fate as the former Aston Villa player of the year was sold for less than half of what was paid for him.

Since their departures from Liverpool, both players have done a good job in resurrecting their stagnating careers. Although Andy Carroll’ progress has been hampered by recurring injuries, the England forward has done well when fit. Meanwhile, Stewart Downing has been one of the best players in the league during the first half of the season and both players will look to dent Brendan Rodgers’ champions league hopes when they return to Anfield today.

Speaking to the press before the game, Andy Carroll has lifted the lid on his conversation with Brendan Rodgers and claimed that he has lost all respect for the former Swansea manager.

‘With Brendan Rodgers there was a lot going on, with what he was saying to me and what was actually happening.

‘I’d go back to see him and he’d say the opposite again. It was the same thing, round and round’.

‘He was telling me one thing to my face and then ring me and tell me a different thing. He was messing with my head.

‘I thought, “I just want to play football. I don’t need this.” I lost respect for him to be honest and knew it was time to go’, said Carroll.