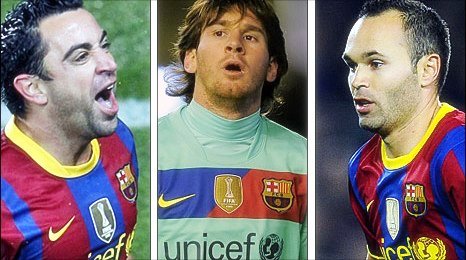 Out of the Barcelona trio, Andres Iniesta, Xavi and Lionel Messi, Messi was revealed as the 2010 FIFA Ballon d’Or winner. This is Leo’s second back-to-back Ballon d’Or win and the first time since 1994, when Hristo Stoichkov won it, that a non-World Cup winning player won the award in a World Cup year.

Former South African legend Lucas Radebe turned the spotlight to the FIFA Fair Play Award and the winners were the Haiti women’s U-17 team. Then, Vicente del Bosque presented the award for the FIFA World Coach of the Year for Women’s Football to Silvia Neid. Jose Mourinho wrapped up the title of FIFA World Coach of the Year for Men’s Football – his fellow nominees were Vicente del Bosque and Pep Guardiola.

FIFA Puskas Award for the best goal of 2010 went to Hamit Altintop. Out of the nominees Fatmire Bajramaj (Germany), Marta (Brazil) and Brigit Prinz (Germany), the FIFA Women’s World Player of the Year Award went to Marta.

Finally – the big one – the FIFA Ballon d’Or 2010 was to be decided between Andres Iniesta (Spain), Lionel Messi (Argentina) and Xavi (Spain). The award was then presented to Leo Messi. Grateful Messiah said on recieving the award:

“Thanks so much for this applause. To be honest, I didn’t expect to win today, but it was already great to be here next to my two mates,” Messi said. “To win it makes it even more special. I want to share with all of my mates, my family, all the Barcelonistas and the Argentinians. 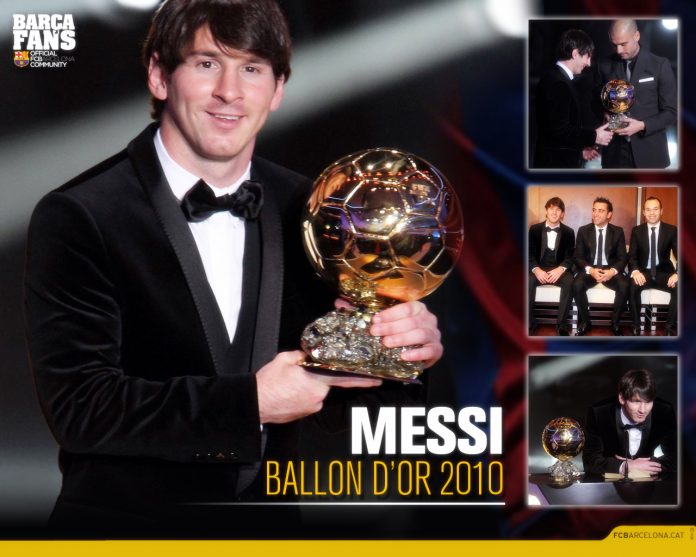 Back in October, we wondered: Is Messi really that good?. A quick look at the stats said yes. Lets revise some of his stats and compare them with his teammates Xavi and Iniesta:

The Argentinean forward found the net 42 times in 36 La Liga games. Not just that, in UEFA Champions League, he scored 12 in as many games. He often became impossible to handle for opposing defenses. He scored the most league hat-tricks in 2010 (4). Out of the 54 total goals scored last season, 41 came off his left foot.

Compared to other top scorers in 2009-10, the closest was Cristiano Ronaldo with 36. Carlos Tevez was fourth with 26.

Xavi, as he has become famous for, completed more passes than any other player in 2010. He completed a massive 2,704 passes in league and 1,025 passes in the Champions League – that’s over 100 successful passes per game. He quality of passing was also untouchable at 92%.

Andres Iniesta has scored or delivered an assist in 20 games where his team won. Iniesta scored eight goals and created 13 assists for his club and country.

His effieciency was highlighted in the 2010 FIFA World Cup final on 11th July. He scored the only goal of the game from his onlly shot of the game to help Spain to their first ever World Cup crown. If Xavi masters the passing department, Iniesta is more prolific in his delivery higher up the pitch.

Even though, the Barca trio can not be compared truly but in front of goal, Messi has no match at all in this world. He totally deserves the award.

His lowest percentage of duels won can be justified by the fact that he got into more duels per game then his fellow nominees.

To wrap things up, here’s a post-Ballon d’Or video of the six Barcelona players celebrating their triumph:

The stats were taken from Castrol Performance Data. We conducted a poll on Soccerlens about who will win the Ballon d’Or in December 2010 and our readers rightfully chose Lionel Messi as the winner.