Blog Teams Holland Analysis: How was Van Persie kept quiet and what did Van Gaal do in response?

When the Mexican national team do overcome the grief of having not made it into the last eight for what would have been the third time in their history, they will realise what they have achieved and this will be helped in no small part by the fans/media appreciation back home. Having been utterly poor in qualifying and making it via the play-off, sandwiched in between those two events was the appointment of Miguel Herrera, who was the 4th different appointment in a difficult period for Mexican football. The ex-Club America boss has got his fair share of plaudits, not to mention numerous vines & memes in his dedication.

Surpassing expectations, the Mexicans found themselves in a round of 16 match, just over 5 minutes away from making it into the quarter-finals for the first time ever on foreign soil. What happened in the next few minutes will forever be looked down upon in Mexican football. After taking the lead and holding out a terrifying Dutch attack, the Mexican heroics were dampened when Sneijder struck with an unstoppable shot and Hunterlaar added salt to the wounds with a perfect penalty. The Mexicans were out, Oranje through.

But while those last few minutes spoiled what could have been the greatest night in Mexican football history, what happened in the prior 80 odd mintues should not be over-looked. The Mexicans, were absolutely excellent. They found the goal they were looking for but their work in the defensive third was exceptional, as good as what we witnessed at the very same venue earlier against Brazil. One of their main success stories in defence was the lack of involvement of Dutch captain and star striker Robin Van Persie. So just what kept the Manchester United player quiet for the entirety of his time on the pitch? 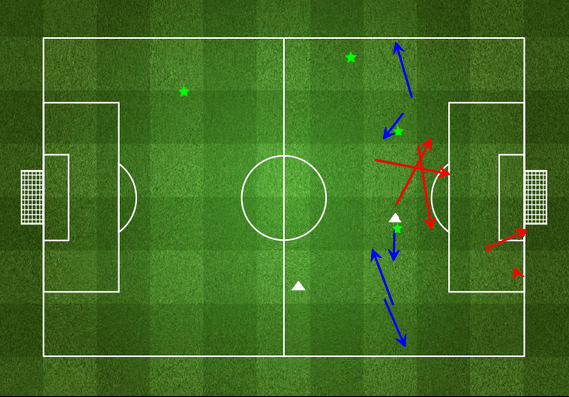 The above is a graphical representation of Van Persie’s attacking play against Mexico. He created no chances, played a couple of short passes and any forward pass attempted was gathered up by the Mexican defence. He had the solitary shot in the entire game, a weak one, off target.

Van Persie wasn’t helped by the fact that Mexico played their usual three man defensive system. It often meant that the striker had two defenders always on him at the very least. He remained isolated with Robben drifting wide and Sneijder dropping deep, both looking for extended Dutch creativity but failing to connect with Persie. This essentially made the job of containing the striker significantly easier for the Mexican side.

As the game wore on it was evident that the climatic conditions were taking it’s toll on the players, particularly Van Persie. The only thing the striker had going for him in the opening exchanges was his work rate, but this disintegrated with the flow of the game. Van Persie was tactically outclassed by the Mexican defence, and beaten physically by the Brazilian climate.

Despite this, Robin Van Persie is still a world-class striker and an absolute quality act to have in the side at any point of time. It would thus take a brave man to sub Van Persie off and put him out of his misery; bravery that can exist only in an individual of Louis Van Gaal’s stature. The Dutch coach soon to be Manchester United boss took off his captain and replaced him with the reliable Klaas-Jan Huntelaar. A move that left many astonished, but others amazed at Van Gaal’s approach to the game.

Huntelaar offered a bit more of a centre-forward than what Van Persie was, crucial because the Dutch were going for an all out attack with crosses into the box and shots that were looking for lay-offs on the rebound. Huntelaar poses as the best option to have in and around the area for these sort of situations. His first real chance was an incredible save by Ochoa from point-blank range, though the striker was ruled offside eventually. The other extra bit that came with Huntelaar’s introduction was added energy, which was severely lacking in Van Persie.

These were minor improvements in the Dutch system which didn’t do much for the course of the game. The man who finally got the Dutch back in it was the man for the occasion, Arjen Robben. Winning a penalty in stoppage time he again proved his value to the side. The man to take the penalty was none other than the Schalke man bravely brought on by Van Gaal. And a perfect penalty it was, sent the keeper the wrong way and it wouldn’t have been saved even if Ochoa guessed the right way.

In what was a third Dutch come-back win this World Cup (previous ones being against Australia and that thrashing of the defending champions), Van Gaal has proved the genius he can be. Coming back from a goal down to beat Spain 5-1 is fantastic, to throw Memphis Depay on and see the youngster get the winning goal is commendable, but to take your star striker & captain off, only to see his replacement score and put the side into the quarter-finals of the World Cup, is pure class from Van Gaal and i’m going to just stop short of calling it genius. Dutch urgency and attitude won the game, Van Gaal’s thinking was an important component in achieving that end.