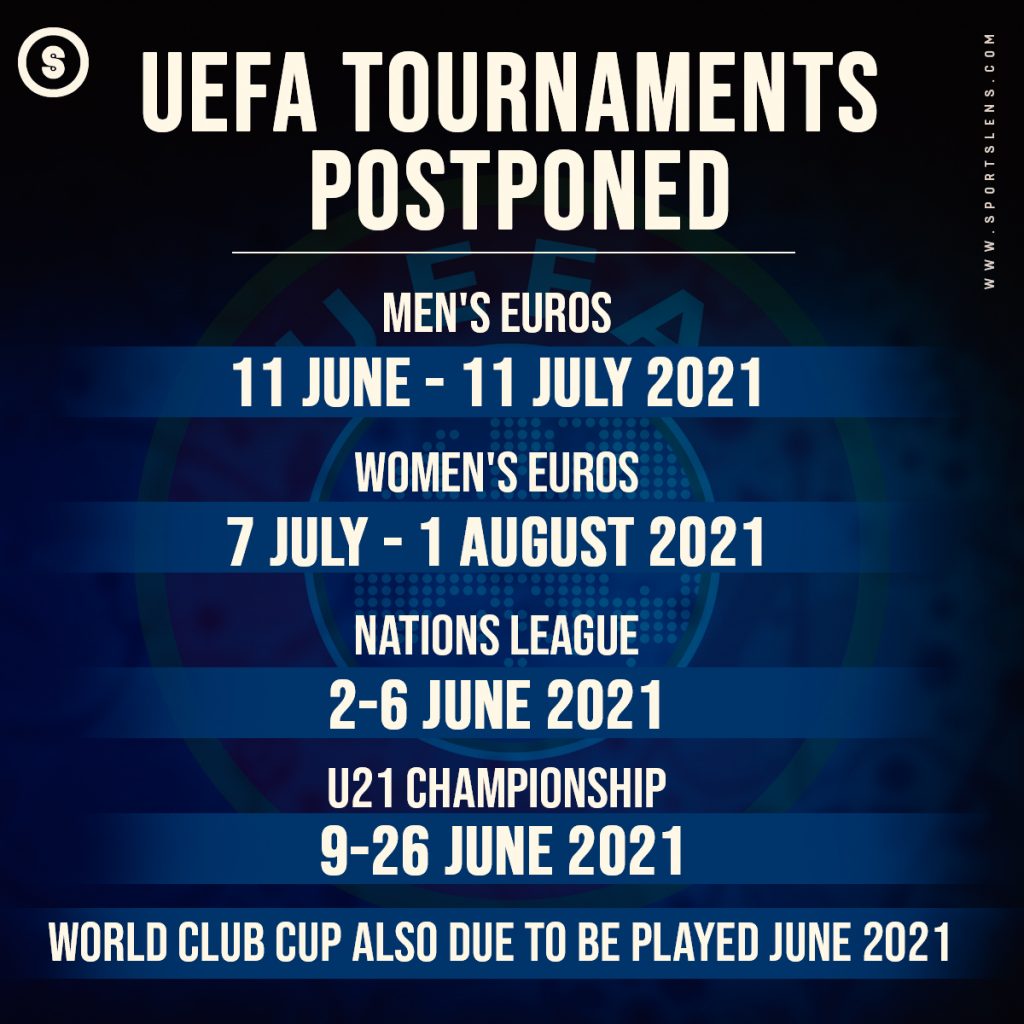 Major sports teams all over the world might find themselves in a sensitive situation in the coming months. Why you might ask? Well, because they need to play to stay profitable – and they can’t do that while all sports are banned due to the ongoing pandemic. Sports clubs are businesses and have running costs. They have salaries and bills to pay, and the costs of raising a professional athlete are also pretty high. Their sources of revenue are ticket sales (and no tickets are sold when matches are suspended), sponsorship deals, and broadcast deals (and no money comes in from these if there are no games played).

Let’s take a look at some of the biggest sporting events that have been affected one way or another by the ongoing coronavirus outbreak, hoping that it will blow over soon.

The latest entry on the list of sporting events dealt a major blow by the ongoing epidemic is the 2020 UEFA European Football Championship. Considering the current situation, UEFA has decided to postpone the championship for 2021 – it will be played between the 11th of June and the 11th of July.

Come to think of it, this shouldn’t come as a surprise, considering that several major European leagues suspended their matches because of the coronavirus epidemic.

There has been a lot of speculation about the fate of the Summer Olympics hosted by Tokyo this summer in the light of the ongoing epidemic. While Japan is not among the hardest-hit territories, the sheer number of athletes and spectators expected to travel to Tokyo had the local authorities, as well as the IOC, thinking.

The options being debated are canceling the event (this one is the least desirable), holding the Games with no spectators (which would be very impractical) or postponing it (which is a very complicated option). Economics and scheduling are clashing with concern for public health here – and the result might not be a pleasant one for the host country of Japan (which has spent a great deal on the event) and the athletes involved.

Formula One has already given its fans bad news when it canceled its season-opening race, the Australian Grand Prix. And the bad news continues to come: the races in Bahrain and Vietnam were both postponed due to the ongoing coronavirus pandemic. The season will likely debut at the beginning of May, according to the plans, with the Monaco Grand Prix – unless, of course, things don’t improve until then.

The NCAA Men’s Division I Basketball Tournament, better known as the March Madness, has been canceled amid growing concerns for the spread of the coronavirus in the USA. Apparently, the NCAA decided to cancel the tournament because there are not enough tests available to make sure the athletes participating in the events are healthy and safe. After considering the potential evolution of the epidemic in the US, the NCAA decided not to hold its traditional March Madness this year.

Hockey fans will have to wait for their favorite sport to return as well: the NHL has announced the suspension of its season for at least two weeks. The Women’s World Ice Hockey Championships, set to be held in Canada from 31 March to 10 April 2020 was also canceled. The host cities of Halifax and Truro will host the event next year.

The situation is dire. We can only hope that it returns to normal fast, so we can enjoy our favorite sports without any more issues in the rest of the year.