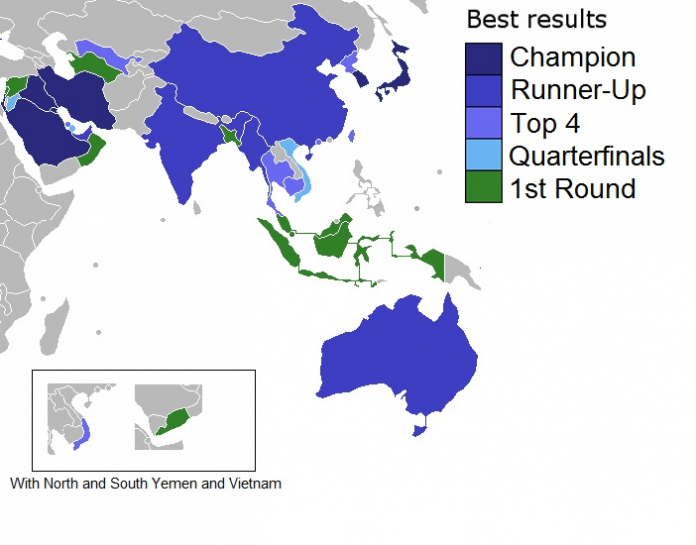 The inaugural Asia Cup of Nations, the second oldest world football competition, was staged in Hong Kong in 1956 with just four participating nations.

The hosts kicked off the competition against Israel and Au Chi Yin had the honour of scoring the very first goal in the Asia Cup when he put Hong Kong ahead after 13 minutes. Israel equalised before the interval through Glazer but Yin netted again to restore the home team`s lead. Stelmach levelled again for Israel before Glazer`s second earned Israel victory. The round robin format saw Hong Kong then hold South Korea, 2-2. Game number three turned out to be the pivotal encounter and South Korea`s 2-1win over Israel established a one point advantage in the table that proved to be the eventual margin by which they became the first Asian Cup winners ahead of Israel. There was some consolation for the runners-up with Nahum Stelach finishing top scorer in the tournament with four goals.

Hosts South Korea retained the cup in 1960 later with a perfect three wins out of three. Israel staged the finals in 1964 and reached their third consecutive Final and it proved a case of third time lucky as they beat India to the title by two points having beaten them 2-0 in the third game of the round robin. Israel also matched the previous winners with three wins out of three.

In 1968 the competition expanded to five finalists and it was once again the hosts, Iran, who emerged winners with four wins out of four to claim their first title in their first Asia Cup tournament.

Iran retained their trophy four years later in a tournament of notable firsts. Six finalists meant two groups of three and in the opening game, in Thailand, Iraq won the first game to be settled by penalties, 4-2 against South Korea. But it was Iran and Thailand who emerged from Group A to the semi-finals. South Korea completed the first semi-final line up in the Asia Cup.

Iran edged the surprise team of the tournament, Khmer Republic, 2-1 to reach the Final where they faced South Korea who needed extra time and penalties to defeat Thailand in the other semi. The Final also required extra-time before a 108th minute goal from Kalani earned Iran their second title. The Asia Cup was dominated by Iran who duly completed a hat trick of successes, on home soil, in 1976.

Kuwait were hosts in 1980 when the finals expanded to ten teams for the first time. Though Iran were hot favourites to make it four successive tournament wins events off the field, namely the Iraqi invasion of Iran, badly affected morale. Even so the team reached the semi-finals where it suffered its first ever Asia Cup defeat to Kuwait. Kuwait beat South Korea in the Final to win the cup for the first time and become the first winners from the Arab region.
The competition continued to expand and in 1984 the eight qualifiers were joined by hosts Singapore and holders Kuwait. The Final between China and Saudi Arabia was won by the latter, 2-0, for a first Asia Cup success.

Qatar hosted the 1988 finals which again comprised ten competing nations. Once again South Korea reached the Final but in the first to be decided by penalties they lost out to Saudi Arabia who retained their crown.

Japan hosted the 1992 finals and rewarded home fans with a 1-0 Final victory over holders Saudi Arabia. Four years later, on UAE soil, the Saudi team returned to winning ways although they needed a penalty shoot-out to defeat the home nation, 4-2, after a 0-0 scoreline at full time.

In 2000 Saudi Arabia reach their fifth consecutive Final but Japan emerged victors with a 1-0 scoreline.

After 2004 it was decided to move the finals competition to a less crowded international cycle and in 2007 it was staged across four nations; Indonesia, Malaysia, Thailand and Vietnam. Australia entered for the first time and to their credit reached the quarter-finals where they lost 4-3 in a penalty shoot-out with Japan. The first time Aussie goalkeeper Mark Scwarzer lost in a shoot out The Iraqi team brought much joy to its war ravaged nation with their first Asia Cup win by defeating six time finalists Saudi Arabia 1-0 in the Final which was watched by an estimated television audience of 650 million.

In 2011 Qatar had the chance of a dry run ahead of the 2022 World Cup when they staged the Asia Cup. Japan reached a fourth Final and as they did in the previous three they triumphed but it was hard going against a dogged Australia team that were only beaten 1-0, after extra time.

Despite the dominance of Japan and Saudi Arabia Australia will be the hottest of favourites when they stage the 2015 finals.