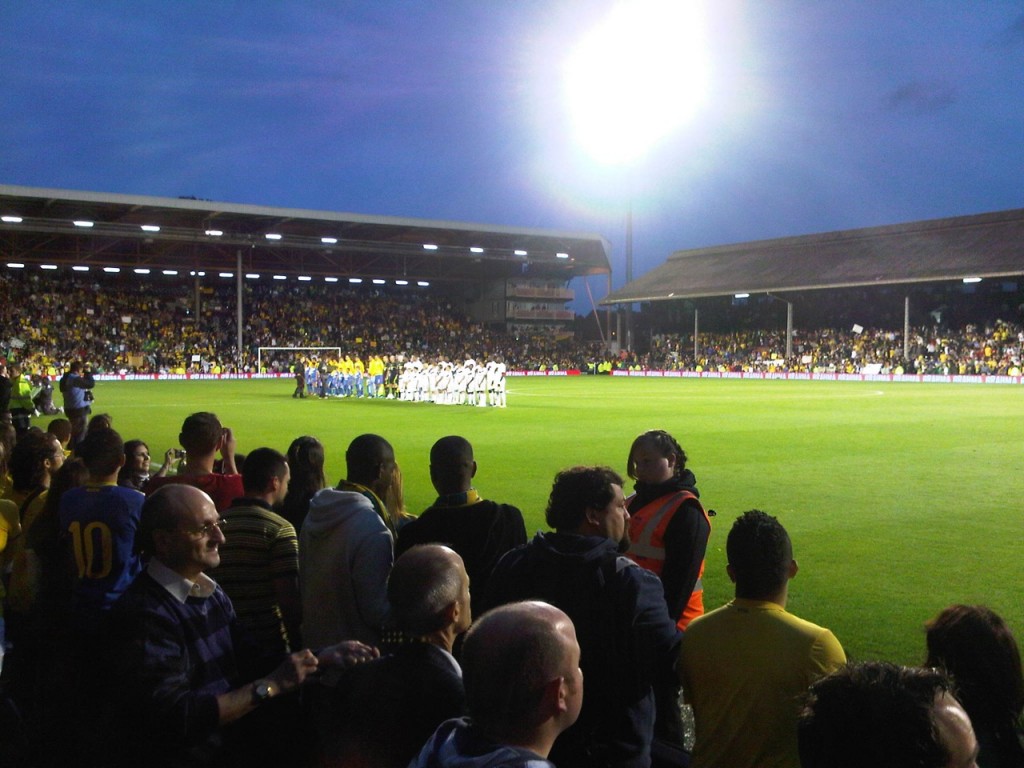 Writer’s Note: This is not a “My First Football Match” type article.

The world has been through enough “football revolutions” to know that it is not everyone’s thing. Nothing is. Sure, I can get swept away in the furore and bluntness of the X Factor final but only for that night (that hasn’t happened yet.) In the same way, it is possible to get carried along in the almost evangelical muttering of crowd during a penalty-shoot-out – doesn’t mean you’ll be a die hardcore England fan for life. So when my newly immigrated Canadian flatmate asked me to initiate him into his first football match I was apprehensive, especially when his main comments during Match Of The Day are ironic hyperbole and: “All goals look the same”.

The perfect opportunity presented itself! Brazil v. Ghana at Craven Cottage. It couldn’t be more perfect for commencing a football education; history, flair and the perfect mix of dedicated fans and exhibition hangers-on. A walk down the Thames with a capacity crowd of Brazilians and Ghanaians, how could he not ‘get’ this? With the drums, dancing and colourful kits this was hardly a nervous England team we were approaching, this was a carnival for football. This crowd substitutes ‘Oh no’ for ‘Olé’ and booing for mexican waves.

Of course, this being an article there are bound to be some revelations coming. Maybe your experience is different, I’d like to know. Once we got inside Craven Cottage and took our seats it was clear that he was overwhelmed by the energy in the stands and as we stood for both national anthems I was happy that we’d chosen this game. Sitting between the Brazilians and Ghanaians showed us that theorising about soccer is something that every set of fans do. Ghana-tracksuit-clad BlackBerry wielders in front of us shouted their own formation ideas at the substitutes whilst trying to get an autograph and the Brazilians behind us debated – amongst other things – Pato’s hair, Ronaldinho’s inclusion in the team and if standing should be allowed at a game.

Suddenly I was reminded of my own first game. Liverpool v. Sion, Anfield, 1996. It finished 6 – 3 to Liverpool on the night, yet so many other things stuck out about that gloomy Halloween. I was dumbfounded by the trick-or-treaters who weren’t watching the football; that stadium felt like the centre of the world for me. The politics of seating were clear: kids around, keep the swearing down and make sure he feels welcome. Standing in front of a father and son is a no-no! The food isn’t there to be good, it is there to sustain you until full-time. Any goal should be appreciated as long as you’re still going to win. I was glad we could still exhibit these features of stadium-going to a new fan.

Some football happened too! As you would expect Brazil were confident on the ball but muscled around by Ghana and at times challenged to panic by Muntari et al. This spurred the Ghana fans on, whooping and hollering for the smallest of victories on the turf. At one point the mood was such that Brazil fans were beginning to wonder if the underdogs would outdo the newly forged Brazilian squad.

The showmen of the Brazil team soon took care of any confidence that a robust Ghana team might have harboured. They were only able to do so after Mike Dean had his say on proceedings, showing Daniel Opare red and reducing the Ghana side to 10 men. Ronaldinho and Neymar duly obliged their baying fans and exploited the extra space with flicks and flip-flaps to get the crowd on their feet.

This was turning out to be the perfect match for introducing a disenchanted North American to football. It had a backdrop of Brazilian angst after a disappointing Copa America and Ghana fans who were keen on the giants scalp. It wasn’t to be and hierarchy took control when Leandro Damaio put Brazil 1 – 0 up. That’s how it stayed, not for lack of effort, just accuracy. As the South American stars poured on and off the pitch it was clear that the Black Stars saw a 1 – 0 loss as quite the triumph if they had played entertaining football. This summed up the match and a flatmate’s introduction to football, if the culture surrounding football is full of vibrant people then the score suddenly becomes less significant. Take it on the chin or appreciate football for what it is.

Maybe that is how I will leave the Canadian’s experience of football. After all, he seemed much happier when he facebooked the Michael Jackson statue on our way out. It was nice to reminisce about my first experiences and appreciate football like you do in the World Cup, for the overall experience not just the nail-biting moments.