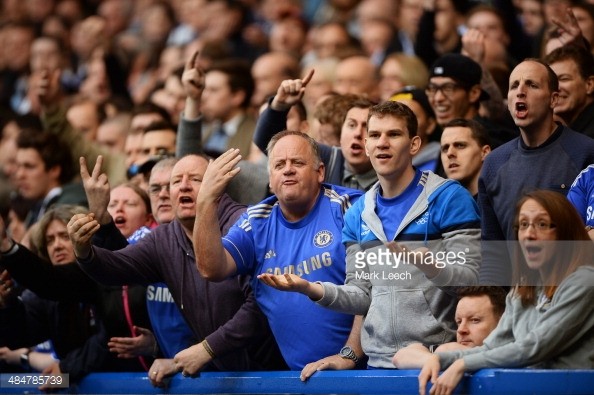 No matter how long or how hard once sits and thinks about the going on at Chelsea, he’ll still be thoroughly dumbfounded in the end. It’s one thing to lose your stride after winning the league and dropping out of the title race, but it’s quite another to be in 16th place and one point adrift of the relegation zone with almost half the season gone.

With every passing game, there are more questions than answers that are being thrown up. Their latest defeat, a 2-1 loss at high-flying Leicester City, was hardly even a surprise to some. This now makes it 9 losses and 15 points in 16 games for the Blues, ahead of what now looks like a relegation six-pointer at Stamford Bridge against 19th placed Sunderland on Saturday.

The fans have been scratching their heads, looking high and low for the possible reasons to a season that has now become a downright debacle. While finding the right answers is important, it’s also equally important to ask the right questions. We list down 5 of them.

1) Is this well and truly a relegation battle?

After the Leicester defeat, Mourinho said that his team were ‘in the relegation zone, but not in a relegation battle’. Amidst all the confusion, he may have gotten that mixed up. Despite hovering perilously close to it, Chelsea are not in the bottom 3 as of now. Being in a relegation dogfight though, is a completely different matter.

Take the column that says “Chelsea” away from current the league table and there’s not a shadow of a doubt that they are in one. It’s the brand name of the club and the players that is still making people hesitate to admit it.

The midfield has been overrun, the defence has been cut apart at will and the forward players can’t score for their lives at the moment. The fear factor surrounding Chelsea and Jose Mourinho is well truly gone and every team comes into matches against the Blues believing they can get something out of it. The whole ‘too good to go down’ argument doesn’t hold anymore. Apart from Aston Villa, every team in the bottom half of the table is showing signs of life.

2) Whom to blame – the players or the manager?

Cesc Fabregas gave a Q&A session on Facebook yesterday, and some of his answers were very interesting indeed. Here’s a brief summary:

“I am not saying you can’t have a bad season and bad games. We all have big players and small players but the attitude must be spot on.

“We must always be at the top of our games, even when it’s not, and the behaviour has to be better than what we are seeing right now from every single Chelsea player.

“Confidence is important until a certain point. At the end of the day, as a player you have pride.”

So in short, the players know exactly what the problem is with their performances but have yet to do something about it on the pitch. That’s an extraordinary problem to have for Mourinho, who said he felt “betrayed” by his team after the Leicester game. The effort and motivation to go the extra mile has been conspicuously missing, and Fabregas’ interview makes it clear that the players know where the issue lies.

But then again, who is the man responsible for making sure they’re motivated? The manager, right?

This is a question that has the fans split, but there is no doubt that both parties have to share the blame for the diabolical performances this season.

3) Does post-Leicester rant prove that Mourinho’s lost the dressing room?

The Portuguese may have faced some tough times in his earlier career as well, but he’s never been one to criticise his players publicly. He is expert at diverting the blame by bringing an external factor like the referees or the ball-boys into the picture.

Now though, that has all changed. He let rip at his team after the defeat on Monday night, even going to the extent of saying that his tactics that made them look better than they actually were last season, when they finished as champions. He even went on to question their loyalty and commitment to the cause.

The players’ confidence is in tatters, and having their manager belittle them in front of the world is hardly going to do much to bring it back. Is this a clear indication of the fact that he has lost the dressing room?

4) Is Mourinho really the right man to turn it around?

Think of this: Mourinho may be one of the best managers in the world and has won multiple trophies in multiple trophies over the past decade. He has never though, been in a position where he is now. By his standards, even finishing 2nd or 3rd has been considered a failure. Now, his team are 16th. If it’s a problem he’s never had, it’s a problem he’s never solved. Simply put, just because he’s won title races, it’s not a given that he’ll be equally adept at winning a relegation battle.

Also, he’s never lasted more than 3 seasons at a club because his ego and stubbornness turns it sour by then. The players don’t look willing to put everything on the line for him.

There are also some tactical and selection issues to consider. The likes of Branislav Ivanovic, Fabregas, Oscar and Diego Costa have been way below par right from the start of the season. Yet, Mourinho has stuck with them week-in, week-out. Young players like Kenedy and Ruben Loftus-Cheek have only been giving the odd appearance here and there to prove their worth, which they have done very well indeed.

Mourinho is a loved man around Stamford Bridge and it is going to be near-impossible for the fans to accept that he’s not the guy to turn this situation around. If the head reigns over the heart though, the answer to that question may be very different.

5) What is the most realistic target for the rest of the season?

It is unlikely that Chelsea go all-out in the January transfer market and make some big-time changes. Therefore, the spine of the team will be more or less the same until the end of the season. Turning around the fortunes with a group that looks as jaded and listless as can be is going to be a monumental task.

The title race is well and truly gone and there is no point even discussing that. Mourinho even admitted that the top 4 is impossible now. Finishing in the top 6 would also require the Blues to play like champions for the rest of the season.

The average points needed to avoid relegation in the last eight seasons has been 37. Chelsea have 15 so far #SSNHQ pic.twitter.com/OLAV20rRJQ

Going back to the first question, the first target for Chelsea should be to get out of the current mess they’re in. They are not too big a club to be in relegation trouble and getting got the 40-point mark is what should foremost on the priorities’ list.

Qualification to the last 16 of the Champions League has also given them something to play for in the European front, but getting the better of Paris Saint-Germain in the form they’re in at the moment looks to be too much of an ask.

All in all, it will be safe to say that this is going to be an extremely unspectacular season for Chelsea. A mid-table finish is hardly something to be proud about but considering the club are in at the moment, they should take it.